SLC is currently in "early access" mode which means it's still being improved - primarily based on your suggestions - in order to make it the best it can be.

If you have feedback on SLC, please contact me here » steve@lanilogic.com or the Discord Server - thank you! 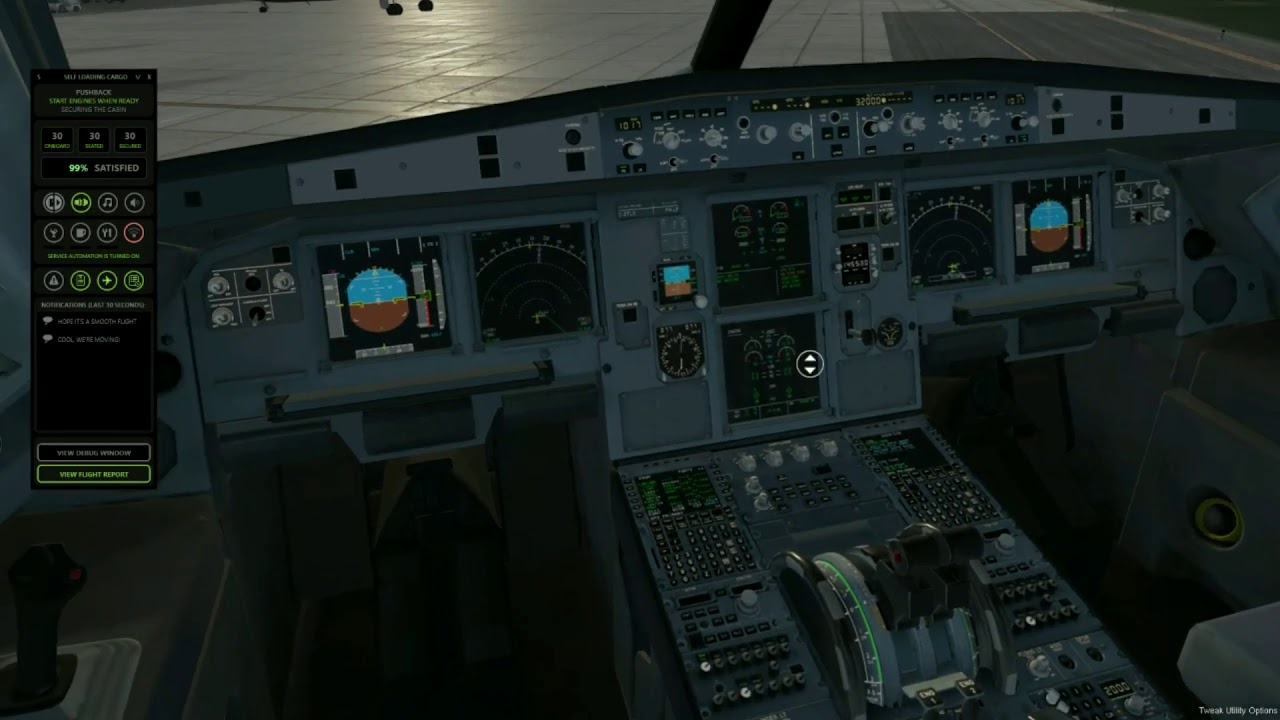 Hello again everyone! Version 1.5 of Self-Loading Cargo is making good progress and I wanted to share a little update with you which you may not have already seen concerning the new automation functionality.

In the latest version it is now possible to have the software run completely automated from departure to arrival - SLC will recognise every flight phase, the crew will perform their duties in a timely manner (such as opening/closing doors etc) without you needing to do anything other than get set up and fly the aircraft.

In doing so, SLC brings a new level of immersion to the simulator while requiring no extra input from yourself. However, if you do wish to control the crew then you can still turn off the automation and handle everything yourself (as you could before).

This new functionality will especially assist those in our blind flight simulation community who might otherwise be unable to enjoy SLC to its fullest so I'm looking forward to releasing it and seeing what sort of feedback I receive.

Thanks for your continued support! The release won't be long now :)

Hello again everyone - with the release of v1.4, which is a maintenence release but includes a lot of new features, we now have text-to-speech support for all events with dynamic variables so that in-sim weather and aircraft information can be broadcast to the cabin :)

In addition to this, the new version now includes logging of flights in a permanent flight book so you can keep track of your average statistics.

v1.5 is in active development now, and will be a major release of the software - stand by for more :)

Hello again everyone -the latest version of Self-Loading Cargo has been released - if you downloaded 1.3 really early, please note that there is a 1.3.1 hot fix that you should download instead which fixes a couple of issues as you can see on the changelog.

This version now includes better handling of seating, more customisation over the things that happen and when, as well as a passenger manifest so you can see the real-time simulation of the passengers as you cruise through the sky. Or turn the aircraft upside down.

Version 1.4 is in active development now and I plan to start really building out the simulation of passengers so more things are taken into account during the flight.

Keep an eye on the changelog, and if you have any suggestions for the public bucketlist, please let me know.

Thank you for your support so far - Steve.

Hello everyone - I'm happy to announce that the latest version of Self-Loading Cargo has been released, with a number of improvements over v1.1.

New features include automated in-flight services (turned on by default, but available as a toggle in settings), much improved turbulence functionality and detection, improved "toilet" functionality for passengers as well as numerous updates to other existing functionality and other bug fixes.

I have also been tinkering with some VST filters to hopefully improve the default cabin-crew sounds - Let me know what you think!.

The full changelog is available and explains everything new and you can download the new version from your account page.

Can I just extend my thanks to everyone who's supported this release with their feedback and suggestions (some of which are still under development). It makes my life much easier - so thank you.

The first version of SLC has been released with sound packs which were recorded by myself (not a pilot) and my daughter (not cabin crew). While I feel we did a reasonable job, there's definitely room for improvement.

On that basis in your account page, I have made the spreadsheet I used when creating SLC available for download. It contains a list of transcripts and associated filenames so you can roll your own voice packs and share them with the community.

SLC already supports this - if you create a new folder in "SoundPacks" and then place the files you wish to hear in there, as long as the filenames are correct they will override the ones found in "/Default" - you can replace a few files, or all of them. If you replace one or two, the remaining default sounds will continue to play.

Have fun - don't forget to let me know when you've made some soundpacks so that I can share them with the wider community for you.

I've been pushing to get this update out to rectify a couple of immediate issues that came to my attention from you guys (thanks for that!) so here it is.

Just to let you know that I am busy working on the next update - I have it pencilled in for Monday but it might drop sooner depending on commitments at the weekend.

One thing I hope to correct is better "Ready for Takeoff" support for the FSLabs A320 which I am told does not support the data-ref for Landing Lights, as well as a number of fixes to timings of boarding / deboarding, service penalties and other minor issues which have been reported.

Once done I will update the website with a full changelog - for now, thank you very much for your patience and support.

Update and thank you

Hi there - I just wanted to thank everyone for the support and feedback this last few days.

This evening I have compiled a list of issues which have been reported, and some new feature requests which I will prioritise to make SLC even better for you - pleaase expect an update to the software within a couple of days.

29th August 2019 - LOCALISATIONRESOLVED
I've been made aware of a bug which prevents the application from starting in non-English systems - I will rectify this very shortly with an update to the application once I figure out what is going on. It seems to be something to do with the parsing of numerics from the settings file, perhaps a "comma" instead of "decimal".
UPDATE - I have identified the issue, and I am testing a fix right now so I will update the installer shortly.
UPDATE #2 - I have updated the installer (please re-download if you have not done so) and am now testing SLC - please report any further issues to steve@lanilogic.com. // 29th August, 14:50 UTC
UPDATE #3 - I have successfully completed a leg from EGPF to EGNT with my system in "Portugese" mode to test internationalisation - no problems detected. // 29th August, 15:50 UTC

Please let me know if you're still encountering issues on non-English installations.

28th August 2019 - Sounds "Sticking" RESOLVED
I'm currently aware of an issue that in some cases causes the sounds to temporarily "stick" between "Positive Rate, Gear Up" and the "It is now safe to use your electronic devices" sounds. The application continues running, and approximately 1 minute after the sounds are supposed to play, they play but then get cut off - I will release a patch for this shortly once I figure out what is going on.

28th August 2019 - Missing icons RESOLVED
A couple of the items on the Flight Report screen have missing icons for some reason.

Better VoicePacks
At the moment, the pilot + cabin crew voices are recorded by myself and my daughter (who's 10!) so they are not the greatest - although we have tried our best to sound "good enough" to get SLC going.

SLC supports the idea of soundpacks - you simply create a new folder under /soundpacks in your application folder, and any sound file in there which matches one in /Default will be played instead - so you have the option of making different cabin crew voices / pilot voices etc for each different airline you wish to fly for.

It would be awesome to have some community-made soundpacks. I am finalising an Excel spreadsheet which contains a script for each of those sound files so that you can make your own.

Normalised Sounds / Sound Profiles
It's difficult to know what a "good" default settings is for sounds, especially across sound packs because various addons have different levels of their own sounds like avionics, wind sounds etc.

Ideally I'd like to see the sound volumes be saved/loaded on a per-aircraft basis, so you didn't have to continually set the volume on SLC when switching between aircraft.

I would absolutely love to improve this further, and make the ramifications of a bad decision much more plausible.

Right now for instance, with a medical issue - you can decide to continue or divert the flight. It would be brilliant if you could ask if a doctor is on-board, and have a whole scenario play out to manage the illness and perhaps have an achievement at the end if the passenger survived (and you made the correct decisions all the way down).

Similarly, with unruly passengers you also get to choose to continue or divert the flight at the moment, but it would be a big improvement if there were some extra sounds and interactions with people on the ground maybe performing an arrest etc - there are currently sounds to this effect if the flight is diverted, but again, I would love to improve the whole thing to make it more plausible and exciting.

Improved Flight Analysis
Right now there is a lot of data being generated by SLC during a flight, but the analysis at the end could be improved - I will be looking at extending this functionality further to take into account any delays which occurred, for instance, and keeping a tab on your overall performance across multiple flights.

Customisable Times and Event Probabilities
In the next update to SLC there will be the ability for you to customise the timeframes for boarding passengers, in-flight services and the probability of tech / medical / crew interactions happening.

The reason being, there's no fixed value that everyone will like - so I will allow you to tailor SLC exactly to your needs.

Improved accessibility for blind users
Based on some lovely feedback I received, I've been told that SLC is very much usable in its current form for members of our blind community who fly flight simulators.

To be honest I did not realise such a community exists and I'm over the moon that I'm able to help them get more enjoyment out of their sim.

I've received some points on how to improve things further and so those recommendations will be built into the next update.

If you have feedback on SLC, please contact me here » steve@lanilogic.com or the Discord Server - thank you!